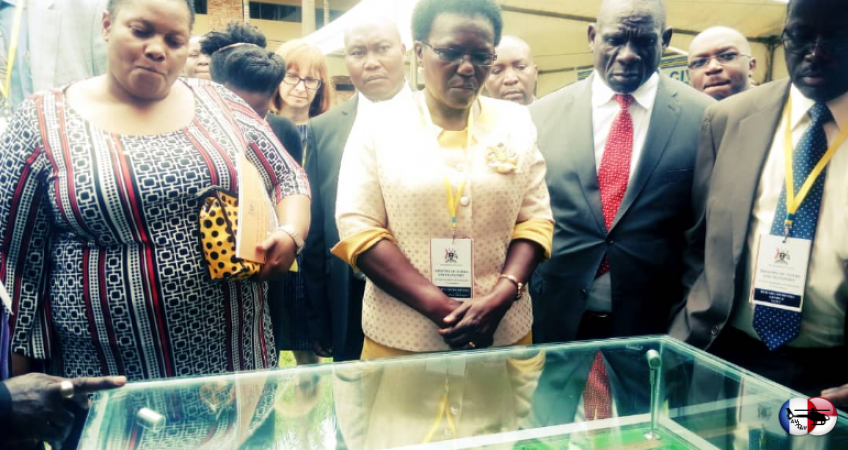 Civil Aviation Authority actively participated in the 14th Joint Transport Sector Review Workshop and exhibited a model for the upgrade and expansion of Entebbe International Airport at Speke Resort Munyonyo from September 27-28, 2018.

The Authority’s Managing Director, Dr. David Kakuba, participated in a panel discussion moderated by the Minister of Works and Transport, Hon. Monica Azuba Ntege, and he enumerated a number of achievements registered in the aviation sector.

In her speech, the Minister affirmed that the ministry’s improved performance was a step in the right direction. “Inclusive growth is at the center of our development plan in accelerating multi-modal transport systems. This year will see better performance compared to last year, given the rate at which infrastructure is being developed,” she said.

She also stressed the need for organized transport systems in order to meet global standards.

Highlighting recent achievements in the aviation sector, Hon. Ntege cited an 11% increase in international air traffic in the last five years, growth of domestic traffic by 25% from 2016 to-date, government commitment to purchase aircraft and revive the national airline and construction of Kabaale International Airport whose first phase is estimated to be completed by 2021.

While stressing the need to harmonize Uganda’s regulations with those of other global players and ensuring continued compliance with international Standards and Recommended Practices (SARPs), Dr. Kakuba advocated for expeditious consideration of the proposed amendments to the CAA Act.

He explained that one of the key proposed amendments sought to create a provision for the establishment of an independent accident investigation unit that was not funded by CAA to rule out any conflict of interest. He also highlighted the need to grant air worthiness inspectors unlimited access to aircraft and private aerodromes without having to first seek permission from the parties to be inspected, among others.