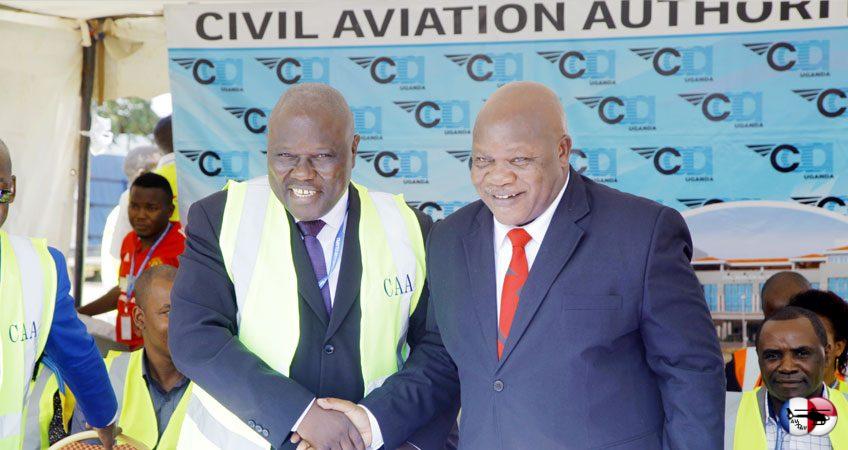 Air Tanzania, resumed flights in and out of Entebbe International Airport (EIA) On 26th August, 2018, and was welcomed with a water gun salute in a colorful ceremony spiced with traditional entertainment.

The Chief Guest, Hon. Bagiire hailed the decision by Air Tanzania to extend operations to Uganda as timely because of the rapidly growing aviation industry. He noted that this would ensure competitiveness in the region.

“Air transport is a key driver of development and has a big influence on tourism, agriculture and business. I would like to implore the management of Air Tanzania and all industry players to observe with strictness the minimum required standards as we strive to deliver reliable and quality air transport services. The launch of Air Tanzania means a lot to the future development of our two economies in the region,” he said.

The minister said that the Government of Uganda was highly committed and will continue to support and provide an enabling environment for the growth of the aviation industry in Uganda. Government is implementing a number of projects to upgrade and expand infrastructure and facilities at Entebbe International Airport and other aerodromes in the country as well developing a second international airport at Kabaale in Hoima to support the oil and gas sector.

Читайте также  Licensing of air services is a must

The Tanzanian Minister for Works, Transport and Communications, Hon. Isaac Aloyce Kamwelwe who led a delegation from Tanzania said that the resumption of Air Tanzania, services in Uganda will go a long way in meeting the travel demands of citizens in East Africa and will provide customers the ability to customize their travel to their needs.

Speaking on behalf of CAA, Eng Sooma said that the Authority was committed to support initiatives aimed to facilitate travel in and out of Uganda. He said that CAA had put emphasis on ensuring better passenger facilitation through addressing stakeholder needs and expectations for a memorable experience through Entebbe.

“We are increasingly modernizing facilities at the airport in order to meet future demands of existing and future potential operators as well as users of the facilities so as to enjoy a pleasant and memorable experience at Entebbe airport, ” he said.

The Tanzania national carrier commenced operations with a charge of $363 less for a return ticket and will fly four-times-a week to Entebbe from Dar es Salaam via Kilimanjaro on Mondays, Wednesdays, Fridays and Sundays.

The airline has served a variety of domestic, regional and international destinations over the years and operates a fleet of 5 aircraft including a Boeing 787-7 Dreamliner.

Air Tanzania Company Limited (ATCL) is based in Dar es Salaam with its hub at Julius Nyerere International Airport. It was established as Air Tanzania Corporation (ATC) in 1977 after the dissolution of the East African Airways and has been a member of the African Airlines Association since its inception.